Tucked away on a quiet corner within Savannah, Georgia’s National Historic District is Abe’s on Lincoln. The bar, which has had many names through the years, is one of the oldest continually run bars in Georgia established in the late 1700s by Polish and Irish immigrants. Today, the bar’s name from the street on which it sits – Lincoln Street.  However, the street was not named after Abraham Lincoln, but the Revolutionary War general, Benjamin Lincoln, yet it’s Abe who inspires here. Perhaps unintentionally, the bar has brought together the things that have come to define Savannah – history, art, and drinking.

When you walk into the bar you are greeted with an ever-evolving installation of napkin art all depicting Abraham Lincoln. Napkin after napkin cover the bar’s low, centuries-old wooden beam ceilings and squeeze next to eclectic objects on the walls. Among the drawings is Abe riding a bike, as a zombie, and in drag. Many depict his image ingrained into historical memory; a man stoically gazing out under thick eyebrows, distinct cheekbones, and signature top hat. 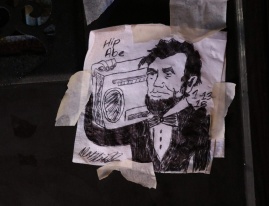 The napkin drawing started one night when a very drunk man stumbled into the bar, and the bartender refused to serve him. The man instead asked for a pen, a napkin and a glass of water. In a few short minutes, the man had drawn a truly impressive napkin drawing of Abraham Lincoln. The drunk man turned out to be a skilled, professional artist who had impressively maintained his artistic skill under significant intoxication. The drawing was so striking the bartender taped it to the wall thus sparking the inspiration for hundreds of bar patrons thereafter to draw their own Napkin Abe creations.

Bar napkins were once the go-to for first date phone numbers, the next big idea, or scribbling out those unspoken words of a broken heart. Reputations have even been built on napkin art. The artist, Napkin Killa, draws caricatures of people in social scenes from the bar to fashion shows or internet famed, Nina Levy, a mother of two, creates colorful napkin artworks for her children’s school lunches. Reversely, a reputation can elevate the napkin such as those by Andy Warhol, whose napkin sketches have appeared at the biggest name art auction houses. 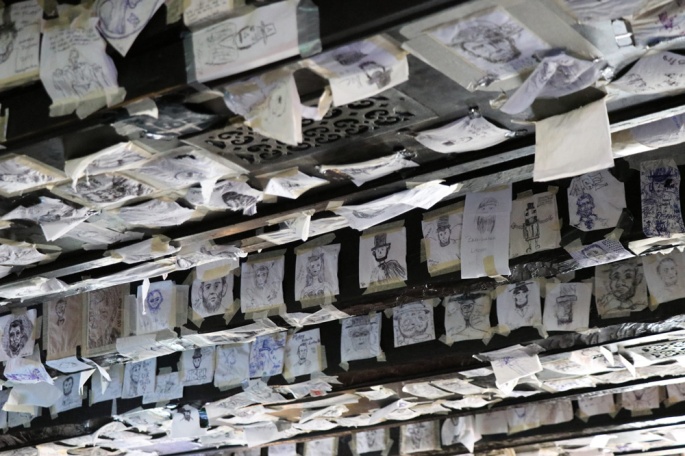 The bar’s informal art installation is not without its standards as General Manager, Mike Petesch describes. Drawings referencing any bigoted, racist, or sexist imagery will not be hung. A stick figure will likely not be either. Drawings should be signed and dated. The napkins are only all taken down when the Fire Marshall declares them a fire hazard, which happens about once a year. Only then are the napkins carefully removed. Some are arranged in a frame to be donated along with other bar freebies for a local charity auction.

Drawing on napkins has a fleeting, unpretentious nature that feel less intimidating to those hesitate to exercise any kind of artistic skill. The material of a humble bar napkin, the informal setting, and a familiarity subject matter, all create an accessibility that often times elude art experiences. 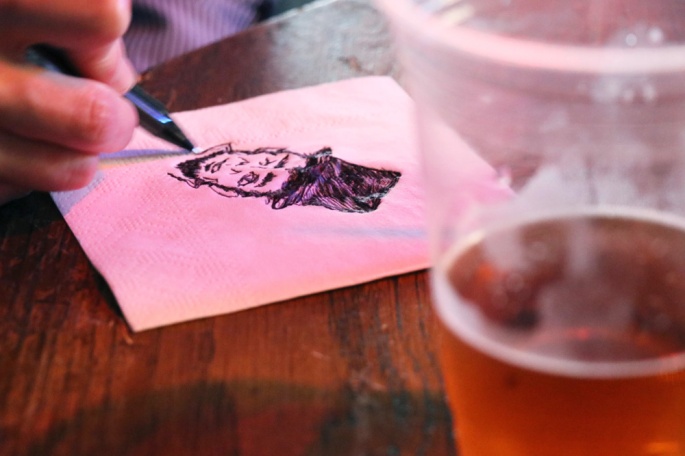 Myths about art persist. Art lives in white box rooms. It is exclusive, bizarre, expensive or just not relatable to name just a few. Experiences that reinforce these ideas can shut the door on one’s desire to appreciate or seek out art experiences. The napkin installation at Abe’s provides a counterexample to what could be more celebrated in the art field. It offers art as something that can live and thrive outside traditional art spaces, have public participation, spontaneous creation, and temporary installation.

For those that find art intimidating, there is no pressure to draw. Most locals don’t, many visitors do. Whether one participates or not the installation says something of our history, social culture, and our perceived notions of where art lives and what it should be. The more we embrace art as an act, process, and production that lives in us all and has the ability to take shape and add value outside traditional settings, the more we may embrace all kinds of art and our own ability to create it.